This week we have a great conversation about schooling, music and proving people wrong. Yes, that’s a thing in the world of ADHD.

Jesse Friedberg (aka Jesse Jukebox) is a Cleveland-based children’s musician who grew up struggling with ADHD and we discuss a number of topics during our conversation.

In school, Jesse had challenges with paying attention like many kids with ADHD and he also had challenges in speech delay which made learning in school even more difficult. With the proper support and guidance, Jesse went on the Berkeley College of Music in Boston and studied songwriting. 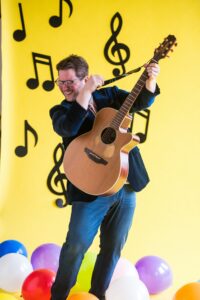 Jesse talks about how teachers called him stupid when he was young and how that made him feel. As well as how it motivated him to prove them wrong.

Jesse went on the earn a Master’s Degree in early childhood education and now teaches among others, kids that might have been like him in his early years. He talks about what it took for a kid with ADHD to get through schooling at that level.

He talks about how now as a teacher, he does work with children that have attention challenges and how he can relate as well as take from his own personal experiences.

Jesse is also running a business and recording albums so he also discusses what it is like running his own creative business and what it takes to do so.

Jesse has a great story of how a child with ADHD can not only become successful but thrive and find work that has meaning to them.

You can find Jesse Friedberg at; www.jessejukebox.com

EP 78: From struggling to thriving with ADHD
David September 6, 2020September 4, 2020 Podcasts No Comments